Increasing a building’s energy performance is a continuous process of improving both building operations and systems. The first step to examining and improving your building’s performance is to measure your energy performance with ENERGY STAR Portfolio Manager. From there, the process of improving energy efficiency will be somewhat different in each building, depending on current energy management practices and the age and efficiency of building systems. However, all buildings that improve their energy efficiency will do some combination of the Energy Efficiency Checklist (pdf).

Energy efficiency in buildings can provide a multitude of benefits for building owners and tenants:

In 2019, the Energize Denver Energy Efficiency Awards were given to the three office buildings, three multifamily buildings and three hotels that improved their energy efficiency the most.  Here are descriptions of the winners! Check them out and learn from real world examples what you can implement in your own building!

Get started with an on-site energy audit from Xcel Energy, they will usually pay 90% of the cost of an ASHRAE Level 1/2  audit. Find an auditor and discuss next steps with Xcel Energy's business solutions center, 1-800-481-4700.

Learn about the types of energy audits available in this Building Owner Guide to Energy Audits.

Equipment and systems can be replaced at the end of their useful life or ahead of schedule.  It may make financial sense to replace some building systems and equipment immediately, as newer equipment has an attractive payback period based on the estimated energy savings.  For other equipment, it may make sense to wait to replace the unit when it reaches its end of useful life, at which time more energy efficient equipment can be selected.

What is the Payback on Typical Energy Efficiency Improvement Strategies? 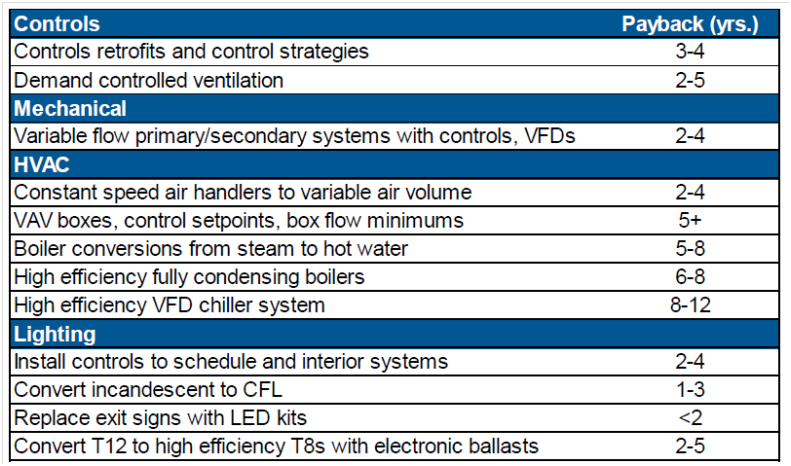 Through Colorado Commercial Property Assessed Clean Energy (PACE), property owners and developers across Denver can access a new financing tool to invest in energy efficiency, renewable energy and water conservation improvements. The voluntary program lowers the cost of third-party financing, which is repaid through the property tax assessment process. Participants receive capital to finance eligible improvements, and repayment is collected through the property tax assessment process (a voluntary assessment is placed on the building owner’s property tax bill). The assessment can provide long-term financing of up to 20 years and stays with the property at the time of sale, removing traditional barriers to financing projects with payback cycles longer than two to three years.

Advantages of PACE for the people of Denver include:

If you have recently undertaken or completed an energy efficiency project, we want to hear about it! Write a case study about your project or host an event with us to showcase your building. Please send suggestions to energizedenver@denvergov.org.

From 2014 to 2017, General Services worked on a Performance Contract at fourteen City facilities, including libraries, recreation centers, and fire stations. The General Services Sustainability Fund received a total of $113,769 worth of rebates from Xcel Energy for investing in energy-saving equipment at these locations. Between January and November of 2017, an estimated energy use reduction of 17 percent was realized at these fourteen facilities.

Denver was in the top ten in the 2017 ranking of community energy efficiency, done by the American Council for an Energy Efficient Economy, and was identified as a “leader in efficiency in local government operations” within a group of five cities with policies to increase the energy efficiency of municipal buildings.