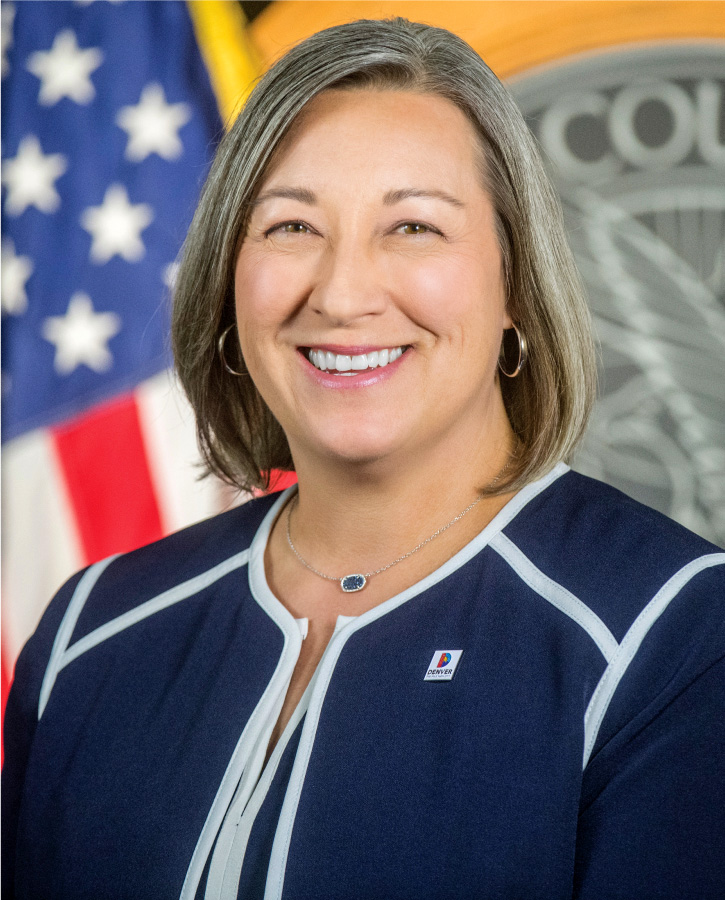 Elected to Denver City Council in 2015, and re-elected in 2019, Councilwoman Stacie Gilmore represents Far Northeast Denver District 11, also known as the Front Door to Denver. Stacie is a proud third generation Coloradan, who believes citizens deserve to live in a community that has smart economic growth, jobs that lead to careers, and a beautiful neighborhood where the quality of life supports their health and well-being. She was elected to the leadership role of Pro Tem of the Denver City Council in 2018 and re-elected to this position in 2019.

Councilwoman Gilmore is honored to have led and sponsored some of the following initiatives and city-wide ordinances:

Currently, she is the Chair of the Council’s Policy Committee and serves on both the FINGOV (Finance & Governance) and BIZ (Business, Arts, Workforce, and Aeronautical Services) committees. Councilwoman Gilmore also serves on the boards of the Denver Preschool Program, Denver Park Trust Foundation, Elevate Denver: Bond Executive Committee, Climate Task Force, and is Chair of the Mile High Flood District. In the past, she has served as the Chair of the BIZ committee and the Economic Workforce Development working group.

Prior to serving as the District 11 Councilwoman, Stacie was involved in environmental and conservation education since 1990 and worked for state natural resource agencies before co-founding Environmental Learning for Kids (ELK) in 1996. After almost two decades as the Executive Director of ELK, raising over $6M in her tenure, she was honored by The White House and President Obama as a Champion of Change for Engaging the Next Generation of Conservation Leaders.

Sign up for the "Front Door To Denver" monthly electronic newsletter to receive updated communications on our community, council office and the city.

Read the latest news from District 11

Would you like to sit down and have a one on one meeting with Councilwoman Gilmore? Do you have an issue you would like to discuss? Drop-by meetings will be monthly at two locations.