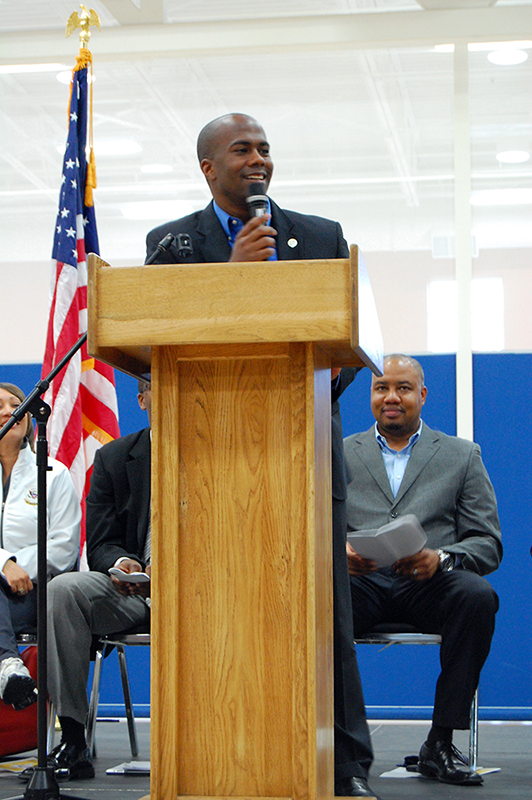 Christopher Herndon was elected to Denver City Council in May of 2011 and currently represents District 8. He served two terms as Council President from 2014 - 2016.

His district includes Park Hill, Stapleton, and portions of East Colfax and Montbello.

Chris earned Rookie of the Year honors in 2012 from Denver’s 5280 Magazine, and during his time on City Council has proven his talent for bringing stakeholders together. As part of the redistricting process, he spearheaded a compromise that kept most neighborhoods intact.

Leveraging his business background, Chris advocates for business creation across the city. Chris is also committed to a thoughtful approach to development as District 8 continues to grow, balancing the needs of mature communities and growing neighborhoods.

As the son of a public school teacher, Chris gained an early appreciation for public service during his childhood in Kansas City, Mo..

“Growing up and seeing the influence my mom had over the course of her career really inspired me. I’ve always wanted to emulate that and try to make the kind of impact she made.”

Chris’ public service career began with his acceptance to the United States Military Academy at West Point. He graduated from West Point in 1999 with a bachelor's degree of science in Systems Engineering.

After graduation Chris served nearly seven years in the United States Army, including deployments to Kosovo and Iraq.  He was honorably discharged in 2005 with the rank of Captain.

After transitioning to civilian life Chris worked in management roles at large corporations, including time with United Airlines at Denver International Airport.

Chris’ commitment to service doesn’t end with his day job. Since moving to Denver he has continued to find ways to give back.  He served on several community boards, tutored Montbello High School students, and helped bring financial literacy courses to the district.

Chris describes himself as a lifelong learner, and his continued education includes a Master’s in Management from Webster University, a certification in Lean/Six Sigma, a fellowship at the Kennedy School of Government at Harvard University, and most recently a Master’s in Public Administration from the University of Colorado - Denver.

He lives in Northeast Denver with his wife, daughter, and son.

Sign up for the Council District 8 newsletter to receive the latest news and events in the district, straight to your inbox!

District 8 Neighborhoods include:
Park Hill, Stapleton and portions of Montbello and East Colfax.

Read the latest news from District 8