Under the Denver Building and Fire Code (amended December 19, 2016), all single-occupant restrooms within the City and County of Denver must have signage indicating that they are open for use to all persons, regardless of gender. A single-occupant restroom is one that contains only one toilet and a sink, or a toilet and urinal with a sink, and is intended for use by one occupant at a time. Family or assisted-use restrooms must also be designated as gender-neutral.

The requirement for gender-neutral signage applies to single-occupant and family or assisted-use toilet facilities
in both new and existing buildings. It does NOT apply to the following:

During plan review, staff will ensure that the restroom design and number of facilities provided complies with the International Building Code and International Plumbing Code, as amended. When single-occupant stalls are provided, plans must indicate that the signage will comply with the gender-neutral requirement. In buildings with only two restrooms that are both single-occupant, both restrooms must be fully accessible for individuals with disabilities; when there are more than two single-occupant restrooms, at least 50% must be accessible.

Existing buildings have until April 30, 2018, to change the signage on their single-occupant and family or assisted-use restrooms to show the restroom is open to anyone and to ensure that the restroom door can lock from the inside.

How long do I have to change the signs on my existing single-occupant restrooms?

For existing buildings, property owners and tenants have until April 30, 2018, to update signage and add door locks if needed.

Is there a specific sign I have to use?

No – the Denver Building Code does not mandate a particular phrase or graphic for your sign. However, it is required that the sign clearly indicate that the facility is open to use by all genders. Also keep in mind that family or assisted-use restrooms must still be identified as such, but now also contain a gender-neutral reference.

Take a look at some of the images on this page for examples.

Why did we make this change?

Previously, the 2016 Denver Building and Fire Code, which adopted both the 2015 International Building Code and 2015 International Plumbing Code, required the construction, installation, maintenance and signing of restrooms by sex. The switch to gender-neutral signage was voted on by Denver City Council on December 19, 2016, in response to a proposal from Denver’s LGBTQ Commission in partnership with the Mayor’s Office, Councilman Jolon Clark, Councilwoman Robin Kniech and staff from Community Planning and Development.

This change will provide equal access to restrooms and parity in bathroom wait times for all users as well as remove barriers for members of our community who are transgender, gender-nonconforming, or non-binary; those who need the assistance of a caregiver; and parents/family members who accompany children of a different gender to the restroom.

How will this be enforced?

Property owners or tenants who fail to replace signage before April 30, 2018, may receive a notice to comply from Community Planning and Development’s Building Inspection Division. If after the 30-day notice to comply period, the facility fails to comply, the city may seek any appropriate remedy allowed by the Denver Building and Fire Code.

There is no set standard for exactly how your sign needs to look. Get creative! Just make sure both your words and images indicate the restroom is not restricted to a single gender. Below are some examples from MyDoorSign.com, Staples and ADA Sign Factory to help show what we mean. 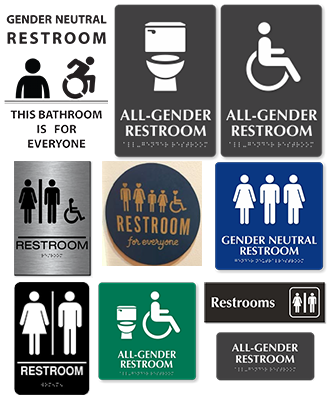 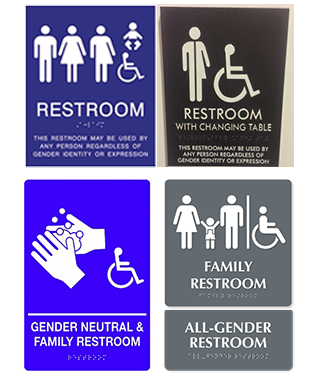