On Aug. 27, 1942, the U.S. government opened the Granada Relocation Center about 250 miles southeast of Denver. It was a military-style confinement center with blocks of barracks surrounded by barbed wire and flanked by guard towers staffed with armed men on watch.

The barracks of Camp Amache, as it was known by those who lived there, housed mostly families of American citizens of Japanese ancestry who were forced to leave their homes and businesses in West Coast states following the attack on Pearl Harbor during World War II.

“After Pearl Harbor, the government put Japanese Americans into camp under the pretext that it was impossible to tell the loyal from the disloyal,” said Daryl Maeda, Associate Professor of Ethnic Studies at the University of Colorado- Boulder. “They said, ‘We simply can't tell, so let's just lock them all up.’”

The Granada site was one of 10 isolated relocation centers in the country that housed around 120,000 Japanese and Japanese Americans for nearly four years.

“The camps were called by the government ‘relocation centers,’ but they were prisons,” Maeda said.

For years, there has been an ongoing effort to preserve the site of the Amache confinement center and to archive the stories of those who were held by the U.S. government in these types of facilities.

“You look at some of the individuals who were brought here; you’re talking about lawyers, doctors, ministers, very professional people,” said John Hopper of the Amache Preservation Society. “They went from being very successful in Los Angeles – some of them doing very, very well – to having to sell everything they owned and coming here to lose it all.”

After the war, many families chose to settle in Denver, some because they couldn’t afford to go elsewhere, but most because they were welcomed by Ralph Carr, Colorado's then governor, who acknowledged the injustices the Japanese American community faced.

In an effort to give voice to and preserve the stories of those who lived through those times, the #IAMDENVER team conducted multiple interviews with members of Denver's Japanese American community, some of whom were interned themselves and some whose families suffered yet persevered and rebuilt their lives in our city.

Watch our full documentary, A Thousand Paper Cranes: How Denver’s Japanese American Community Emerged from Internment and learn more through the individual stories below.

TYPES OF FACILITIES, WHAT TO CALL THEM & THEIR LOCATIONS 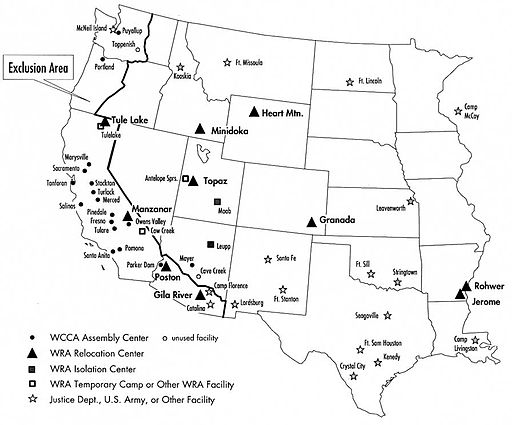 What is the correct name for the types of facilities Japanese and Japanese Americans were confined in? To this day, this topic stirs up controversy. The U.S. government called them relocation centers and some later referred to them as internment camps. This has now long been protested among Japanese Americans who feel calling them camps doesn't do justice to what the community went through while imprisoned.

John Hopper, with the Amache Preservation Society, briefly discusses the controversy and shares one term that is becoming more widely accepted.

On February 19, 1942, weeks after the attack on Pearl Harbor, President Roosevelt signed Executive Order 9066, which enabled the imprisonment of both non-citizens and American citizens of Japanese ancestry. There were three different types of facilities that Japanese and Japanese Americans were sent to at the time. Daryl Maeda, associate professor of Ethnic Studies at the University of Colorado Boulder, details the differences and what the conditions were like for the people held there.

Denver resident, Derek Okubo, takes us on a tour of the Amache site and shares the story of his father, who was held there at a young age, along with his family, before they were released and settled in Denver. At the site, Derek is joined by John Hopper, with the Amache Preservation Society, who details how life was for the over 7,300 people who were forced to live there for close to four years.

Today, while Denver's Japanese American community has dispersed, many continue to gather around Sakura Square, which is between 19th and 20th streets and Lawrence and Larimer. The Square is home to the Sakura Foundation, the Tri-State Denver Buddhist Temple, which has been there since 1947, and Pacific Mercantile, a family-run Japanese grocery store. Watch as the community discusses the small Japantown that once thrived in downtown Denver and how they hope to continue to grow that sense of community again.