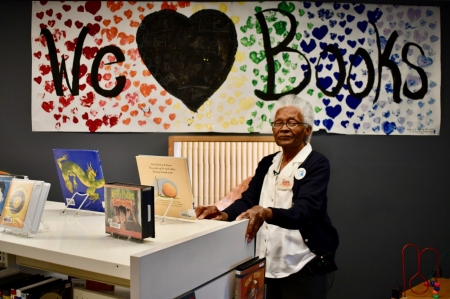 At 88 years old, Miss Edna Williams can't imagine being anywhere but at the Ford-Warren Branch Library every Monday and Friday morning for storytime. She's been a volunteer there since 1992, after retiring from a career as a licensed practical nurse at Rose Medical Center, and the children adore her! She gets into character whenever she reads a story and it's impossible not to be transported to a magical word when listening to her. In February 2019, she was one of the recepients of the Juanita Gray award, which honors African Americans who've demonstrated an outstanding commitment to the community.

We were lucky to spend some time with her during storytime where we got to see her in action, but we also learned quite a bit about her like why volunteering at the library is important to her and what it was like to arrive in Denver with her four kids after fleeing an abusive husband in Florida back in the 60s.

LISTEN: Driving Cross Country in 1968 to Start A New Life in Denver

Now, coming from the south, and there was still some segregation down there. It was beginning to turn. And we were kind of on the edge. We never had any trouble because people had their way, I had my way, and it didn’t matter to me.

So we came in and I looked at the streets and I said ‘We have to find out where we’re gonna go.’ So, on the highway coming in, there were cutoff spots, so I said, ‘Oh Quebec, that’s nice’… we saw Monaco and I said ‘Oh, that’s too ritzy. That’s way too ritzy for me.’ And then it said ‘Washington, Steele’ and I said ‘we’ll get off on Washington.’

So we got on and we curved around and we were in a neighborhood, it was so beautiful. I said ‘Oh, this is real pretty.’ I said, ‘I’ll bet you white folk live here.’ So, I said ‘this doesn’t look like the kind of neighborhood that we want to live in – that we could afford to live in.’ So, there was a black man in the yard and we stopped and I said, ‘Could you tell me…’ – (laughs) this is so crazy – ‘where the black folks live?’ He said, ‘we don’t have no black neighborhood and white neighborhood.’ He said, you can live anywhere you want to here.’

And he said, ‘wait a minute, you’ve got to talk to my wife.” So this lady came out and she goes ‘hey, oh hi, when did you get in town?’ like she knew us. I had never seen her before in my life. Anyway, she said ‘oh I’ll show you where to live. And she invited us into her home. You know, we stayed two months with that lady and her husband. Two months we stayed with them.

And then we went down to here on High Street and it was homey. You didn’t feel left out… and there were people all over – black, white, Mexican. And she took us down and she said, 'oh there’s a house'… so we went down, and this man had never seen me, and I talked to him. I had $350. That’s all I had. And I told him that and I told him I had 4 children. And we lived at 3535 High Street for 8 years. And he said to his secretary, take one month’s rent from this lady – don’t take any deposit. He said, ‘she’ll take good care of my property.’ And I said ‘by God, I sure will. And we did.”

Growing Up in West Denver