Denver actor, playwright and standup comedian Peter Trinh says, “The story of my people is one of triumph,” as he recounts “the most American story” in his one-man play “Boat Person,” based on his parents’ escape from Vietnam and journey to Denver.

For #IAMDENVER, Peter discusses the importance he places on refugee stories, patriotism and freedom today.

I’ve heard this story several times. It was like a bedtime story. My Dad used to tell me, and I would gather bits and pieces of it. I finally sat down with him with the tape recorder to write my play.

Essentially they were about 26 years old. They had just been married, so they went into the ceremony. My dad says this was their honeymoon cause they never had a honeymoon. They were both raised in very poor countryside villages in Vietnam, so deep in the mountains that they didn't really see war. War wasn't very apparent for them. Not like if they were in Saigon.

So, Saigon fell in ’75, and they escaped in ’81. At that time it was kind of like this underground railroad thing, where, ‘Hey, you can get to America. You have to pay the sum of an equivalent of one gold bar per person, and we can get you to America.’

And the question I get a lot of times is, ‘Why did your parents want to go? Were the living situations, so terrible?’ Blah, blah, blah. And it's actually, you know, when you live in a third world country and you have this paved road to get to America or a free country, you go. And if you have the ability to go, you go. My parents were in a place where they were just married and they had the rest of their lives ahead of them. So they decided to go this route ... 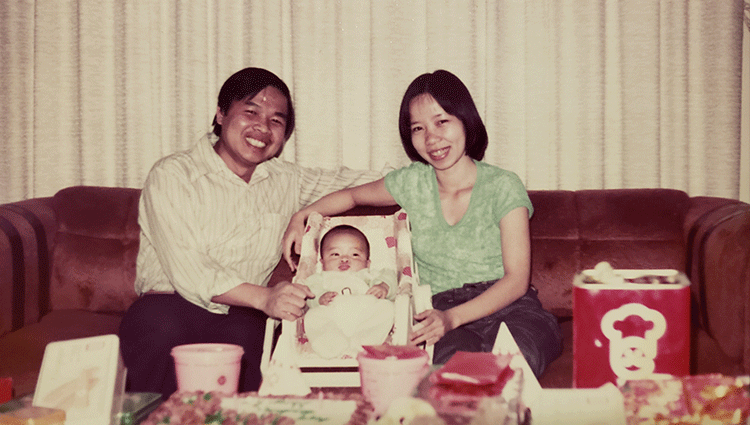 I specifically remember a memory when I was about five years old. It was at a large family gathering and us kids were running around like crazy. I remember doing these imitations of my drunk uncles. And my cousin told me that they were so spot on, ‘They're so good, you should be an actor.’ And I'll never forget those words because it like hit me like a ton of bricks. Like that makes perfect sense. And it was always something like kind of in the back of my head growing up, like this was maybe what I want to do, and toward the end of high school when you really should start picking out what you want to do, I really started pursuing acting, and I've never stopped.

It's hard, especially being an Asian male. So a lot of times it's rough. You look at audition postings, and the first question I'm going to ask is, ‘Would I cast myself in that role? Can I see myself in that role?’ So these traditional plays, you kind of just write yourself off because it's made for a Caucasian cast, you know, and so you try to find things that you would cast yourself in. You look for things that ask for ‘ethnic actors strongly recommended to audition,’ those kinds of things. A lot of theaters have a push for multicultural casting, or they'll say this is nontraditional casting, which means they're looking for more ethnic roles to play what would be traditionally Caucasian actors playing those roles. Your window or your pool of things you're considered for is smaller than everyone else. And that's just the fact of it. One of the best advice I was ever given early, early in my career was that. ‘You will get cast because of who you are and you won't get cast because of who you are. And the faster you can accept that and make it work for you, as opposed to against you, the better time you'll have.’ So I've hung my hat on those kinds of words ...