About Mayor Michael B. Hancock 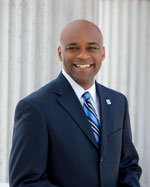 Michael B. Hancock is Denver's 45th mayor, and second African American to hold this position. Raised in the Mile High City since 10 months old, his passion for Denver and its people continue to drive the work that he and his Administration do each day.

With an equity-focused approach, Mayor Hancock has prioritized investing in the city’s children and youth, started record investment in affordable housing and tripled funding for services for those experiencing homelessness, hired more police and firefighters to keep city residents safe, and embraced technology as a Smart City to make government resources work smarter and more impactfully for residents. Mayor Hancock continues to push Denver forward as a global leader and has secured 16 direct international flights positioning the city to do business all over the world and create jobs here in the city. Under Mayor Hancock’s leadership, Denver has become known as a top U.S. city for startups, especially minority and women-owned businesses, one of the best places to live and is working to make sure that all residents, no matter which background they represent, can experience the success that Denver has experienced.

With the onset of COVID-19 hitting many U.S. cities, Mayor Hancock and his Administration quickly pivoted the city’s budget to meet the needs of Denverites, especially those who are most vulnerable and often disproportionately impacted, by securing millions of pieces of PPE for frontline workers, funding for programs to assist residents who need help paying for basic needs, including rent, utilities, mortgages, food and other shelter, and bulking up Denver’s response efforts for people experiencing homelessness. From fighting for much-needed hotel rooms, to creating two 24-hour shelters equipped with beds, restrooms, COVID-19 testing, support services and most of all a safe, warm space for our unhoused residents, Mayor Hancock continues to dedicate resources and time around-the-clock to reaching all of Denver’s residents, especially those who need it most.

Mayor Hancock is Chair of the U.S. Conference of Mayors Transportation and Communications Committee and Vice President of the National Conference of Democratic Mayors. He received his B.A. and from Hastings College, and MPA from the University of Colorado-Denver.

The Mayor’s public service began on Denver City Council, where he served for eight years, including two terms as City Council President. His work in the community did not start there. He worked for the Denver Housing Authority and National Civic League, and was the youngest President of an Urban League chapter in America. He is a die-hard Denver Broncos fan and served as an early mascot for the football team in his youth. Mayor Hancock is the proud father of three children: Alayna, Jordan and Janae. He and his wife, Mary Louise, a renowned local performing artist, have been married for 27 years.

Through bold, energetic and visionary leadership, we will advance the trust and the will of the people to solidify Denver as the most equitable, modern and progressive 21st Century city in the world.
Learn more about the 2019 Inauguration event!

The package of infrastructure investments includes 460 projects valued at $937 million. More than half of the projects on the list will create and improve new mobility and transportation infrastructure, with the remainder dedicated to upgrades and new infrastructure across the city.
Learn more about the Elevate Denver Bond Program.

Denver is leading the way to higher wages and a more inclusive and equitable economy. A raise for Denver's workers would mean families can better support themselves and better afford the city that they helped build.
Learn more about how we're working to increase minimum wage in Denver.