Thanks to Denver voters’ overwhelming support of Measure 2A in 2012, the city is equipped to eliminate its budget deficit, restore essential services and move Denver forward. Our plan to Deliver Denver's Future is made possible by these critical investments and will allow Denver to deliver a smart, 21st-century city that is built on a solid financial foundation with good jobs, healthy children, accessible libraries and safe streets.

$500,000 will be distributed through a grant process to help support and restore the investment in Out-of-School Time (OST) programs. OST programs take place before school, after school, and during the summer when children and youth are not in school.

These programs are important because they:

How this grant money will be distributed:

The Business Personal Property (BPP) tax credit was also included in the 2A initiative. It provides an incentive to business to expand their operations within Denver. For more information on the Business Investment Program, visit www.denvergov.org/InvestInDenver.

$2.5 million in 2A funding will allow Denver Human Services to restore prior program cuts made in the child care program. The program will be funded by a 0.235 mills addition to the 2012 social services mills.

Benefits of the increase in funding include:

CSA employees have taken furlough days since 2009. All five furlough days will be removed from the 2013 calendar and this removal represents a 2% increase in service levels.

2A funding allows libraries to increase their service by 43% and at an average of over 48 hours per week; up from 35.5 hours per week. The increased hours will be phased in from January to April.

The impact of this increase includes: 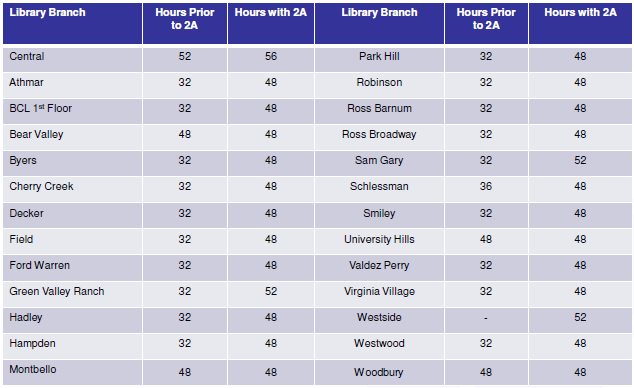 
This program allows all Denver students, elementary through high school, free access to Denver’s recreation centers and outdoor pools. The expansion helps youth engage in meaningful activities and decrease negative activities in school, after school and during vacation months. The program serves all Denver kids grades K-12 and tracks usage through a bar code system.

Additional facts regarding the program and its expansion:


2A hopes to add improvements in litter removal, graffiti removal, turf management, irrigation systems, string trimming and other turf detailing. Without 2A, Parks & Recreation only has the budget capacity to meet 70% of its maintenance standards for current acreage. After the passage of the 2A initiative, standards will improve to 100% over a six year period in increments of 5% per year.

Additional facts regarding the increase in park maintenance:

Police
The Denver Police Department has not held an academy since 2008. As a result, the department is currently operating with 40 officers below authorized strength. The original 2013 budget included only one class of 40 recruits, starting in July 2013. These additional funds will now allow for approximately 105-110 recruits in 2013 and should result in getting the actual strength of the Denver Police Department back up above authorized strength by
the end of 2013.

Police
Currently, 30% of the Police fleet is past its useful life. The funding dedicated to the police fleet will allow the department to purchase approximately 46 new patrol cars. This will result in an operational cost savings, due to the decrease in high maintenance costs of the current fleet. It will also result in reducing the percent of the current police fleet that is currently maintained at 25% of its usefulness.

Fire
Currently, 25% of the Fire fleet is past its useful life. The funding dedicated to the fire fleet will allow the department to purchase 1 new fire apparatus. This will result in an operational cost savings, due to the decrease in high maintenance costs of the current fleet.

2A funding supports doubling the base payment of $186 to $372 for 4,000 qualified low-income seniors and people with disabilities.

With 2A Funding
With $18 million in funding over 4 years, an additional 300 residential lane miles in poor condition will be paved; 75 lane miles per year. The annual paving program will be accelerated, which will significantly reduce the current backlog of neighborhood streets that are in poor condition. Annual arterial/collector paving will shift over to contracted crews, freeing the existing city crews to complete residential paving. 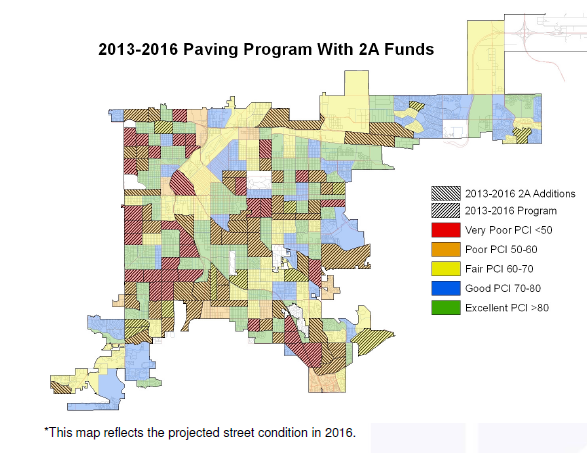 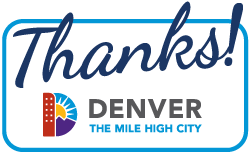