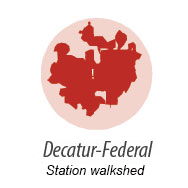 This station is located southeast of the intersection of Federal Boulevard and W. Howard Place, just north of Rude Park, Lakewood Gulch and the Lakewood Gulch Trail. It's the first station on the West Corridor that's outside of downtown.

Decatur-Federal Station is considered an Urban Center station, with an Entertainment overlay.

On the TOD Continuum, Decatur-Federal is a Catalyze station.

Planning documents and other resources that apply to the Decatur-Federal Station Area:

Text translation for above infographic (PDF)