DENVER – The City and County of Denver, through the work of the Department of Transportation and Infrastructure (DOTI) and Denver Parks and Recreation, is excited to announce the opening of the new 39th Avenue Greenway from Franklin to Steele streets in northeast Denver. The stormwater improvement project, built to mitigate recurrent flooding issues in this area of town, fulfills community desires for new outdoor recreational space, water quality and improved connections for traveling.

“This is a neighborhood-informed green space that will be a phenomenal amenity for the residents here in the neighborhood. More than that, what the DOTI project team and community have put together here is a great example of using the latest techniques and best practices for capturing and controlling stormwater in a way that provides multiple community, environmental and public health benefits,” said Mayor Michael B. Hancock.

The greenway offers a new place for adjacent residents to enjoy the outdoors year-round and amid social distancing guidelines, featuring:

“We have delivered to the community a project that increases mobility, addresses water quality, moves stormwater effectively, and provides residents with a new place for outdoor enjoyment and recreation,” said Eulois Cleckley, Executive Director of Denver’s Department of Transportation and Infrastructure. “The greenway exemplifies DOTI’s ideal approach to major projects, implementing enhancements to safety and quality of life on multiple levels.”

Denver thanks the community members that participated on the Design Work Group that provided critical input on the greenway’s many new amenities and overall aesthetics.

“The newly completed 39th Avenue Greenway will enhance community connectivity within the neighborhood and is a beautiful addition to our world-class park system,” said Happy Haynes, Executive Director of Denver Parks and Recreation. “This effort demonstrates city agencies working together with the community to address flood issues while also adding quality green spaces in the City of Denver.”

The 39th Avenue Greenway was built to carry 100-year storm flows to the South Platte River via a new outfall at Globeville Landing Park, which was also improved as part of the Platte to Park Hill: Stormwater Systems Program. Both the greenway and outfall are in the city’s Montclair basin, which is the largest basin in Denver without a natural waterway to convey stormwater, and in an area of town most at risk for flooding in storm events. Designed to mimic a natural waterway, the greenway serves as a place for stormwater water to collect and be safely conveyed downstream.  It is the first part a much larger system that is needed and being planned to address flooding issues further into the Montclair basin.

The 39th Avenue Greenway is an example of a large-scale green infrastructure project, improving water quality, increasing plant diversity and improving natural ecosystems. Plantings and vegetation in the channel naturally filtrate the water, while the open channel helps remove contaminants by exposing them to sunlight.  Two new vaults capture trash that would otherwise end up in the South Platte River and a small pool of water, known as a forebay, cleans water coming into the channel from the south on York Street.

The greenway offers new pedestrian bridges at Gilpin and High Streets and a widened vehicular bridge at Williams Street offering dedicated space for people on bikes. There is also a new multi-use trail that connects people from 40th and Clayton, south to the greenway. The eastern-most entry point to the greenway is at 39th Ave and Steele Street, featuring an entry plaza and nature playground and a new roadway that runs from Steele to York Street. Construction of the greenway also offered an opportunity to improve how people travel through the area; the project extended Monroe Street south to E 40th Avenue where there was previously no connection and made East 42nd Avenue a through-street between Madison and Monroe Streets. Both improvements provide new connections to the 40th and Colorado RTD station.

The greenway features Denver’s first official shared street from Franklin to Williams streets. This plaza-like space allows for recreational use and all modes of travel, but is designed so that people in vehicles will feel like guests and slowly navigate past each other. For people in vehicles, the street serves a way to access and circulate the area for the purposes of finding a parking space, making a delivery, trash collection or catching a rideshare. 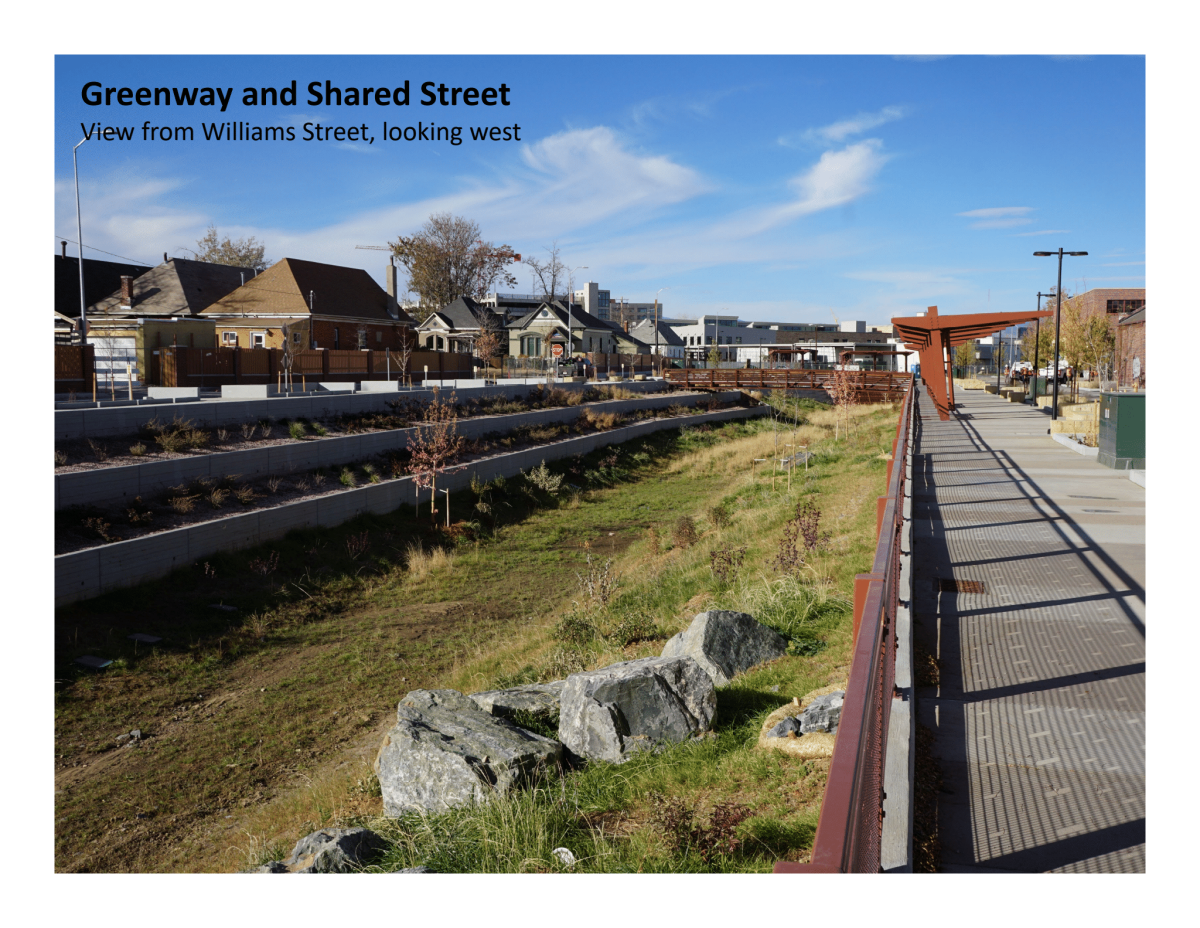 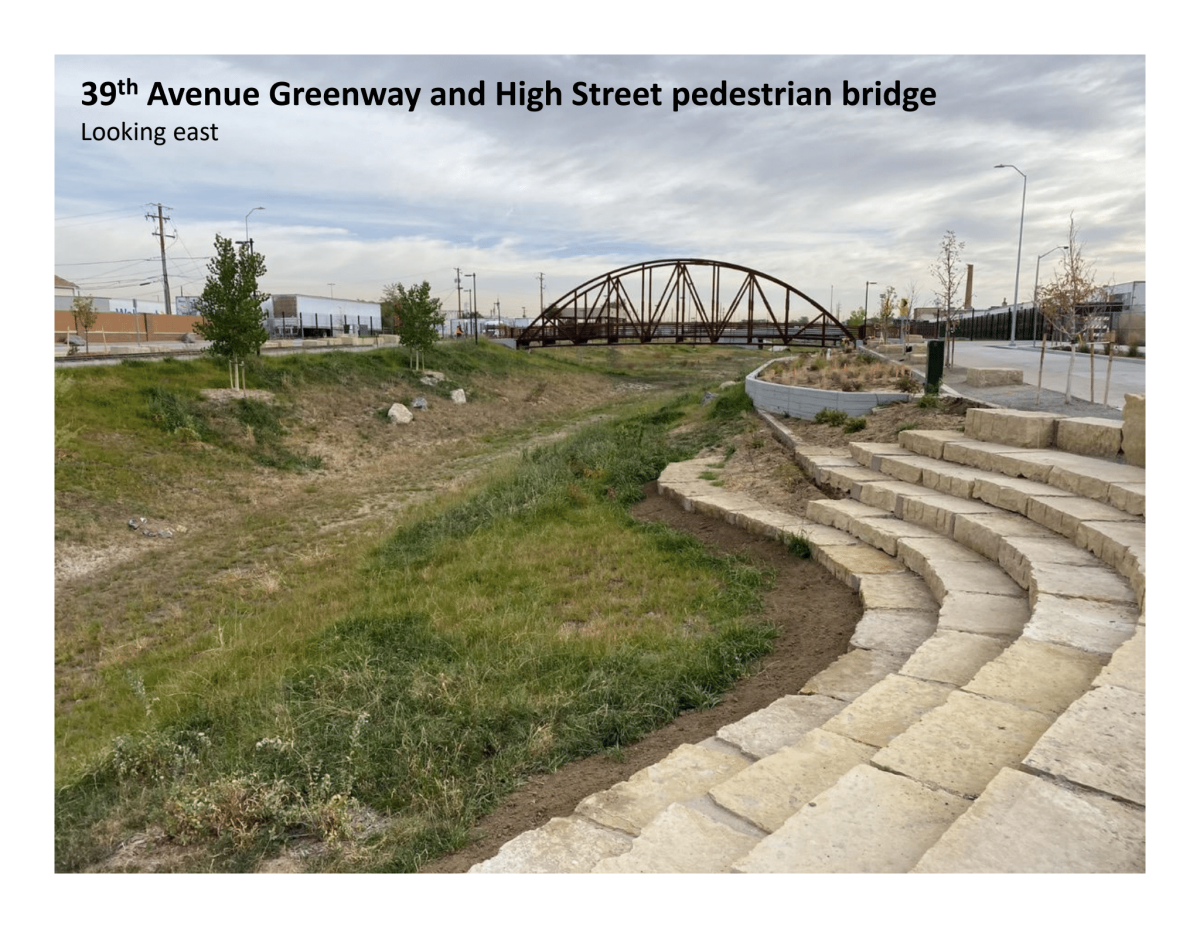 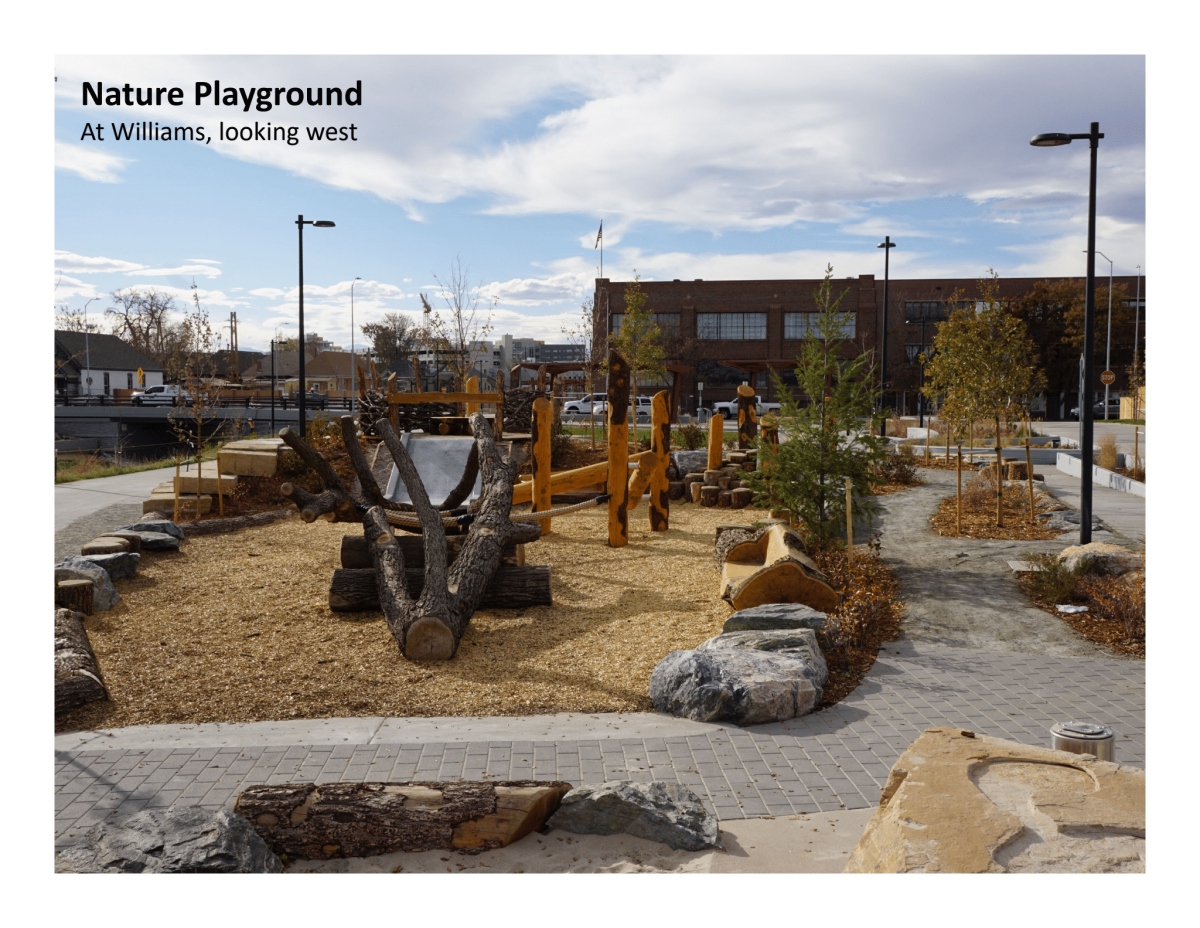