Changes are being made on 15th & 17th Streets to better organize the roadway so that people who walk or roll, bike, take transit, and drive have dedicated space to travel safely and more predictably. The improvements will increase the comfort, safety, and convenience of walking or rolling, biking, and transit as travel options, especially for those who depend on those options as their primary mode of travel.

Exclusive travel lanes for transit buses will be installed on 15th Street from Court Place to Larimer Street and on 17th Street from Market Street to Broadway. Special markings will indicate where drivers will be able enter the transit lane to make right turns. The transit lanes will increase reliability for the fifteen bus routes that use these streets and provide a quicker trip. During the busiest times of day nearly sixty buses travel on 15th and 17th Streets per hour.

Highly visible crosswalk markings will be installed at intersections on 15th & 17th Streets to increase visibility of pedestrians crossing the streets and clarify the crossing area.

New vertical separation will be installed between the bike lane and the travel lane on 15th Street to better protect people on bicycles from moving traffic. Additionally, the current “mixing zones” where people on bicycles mix with drivers making left turns will be removed. This will minimize conflicts between people driving and people on bicycles and provide greater predictability on the roadway.

Benefits for Each Travel Mode

The 15th Street bikeway redesign is a new transportation pattern for everyone. Make sure you are riding "heads up," and exercise caution as people adjust to the new roadway layout! 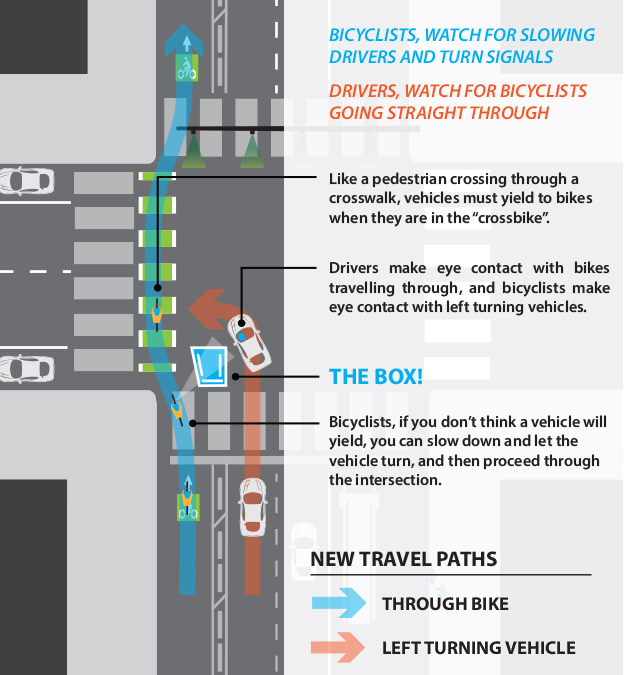