19th Avenue and 20th Avenue were converted to two-way travel on both streets through the North Capitol Hill/Uptown area, between approximately Broadway and Park Avenue West. The emergence of multi-family residences, street-level retail, restaurants, offices, and ongoing development in the area has changed the community, and this project will help reflect this change.

This project rebuilt the third and final half-mile segment of Cherry Creek South Drive, completing the vision for the corridor that began in 2000.

This project addressed pedestrian safety along Hampden Avenue and Havana Street from approximately Dayton Street to Dartmouth Avenue. Denver Public Works and CDOT coordinated to add new sidewalk, landscaping and connections to the Cherry Creek Trail within the right of way to improve access near the trail and golf course.

Read more about the project features 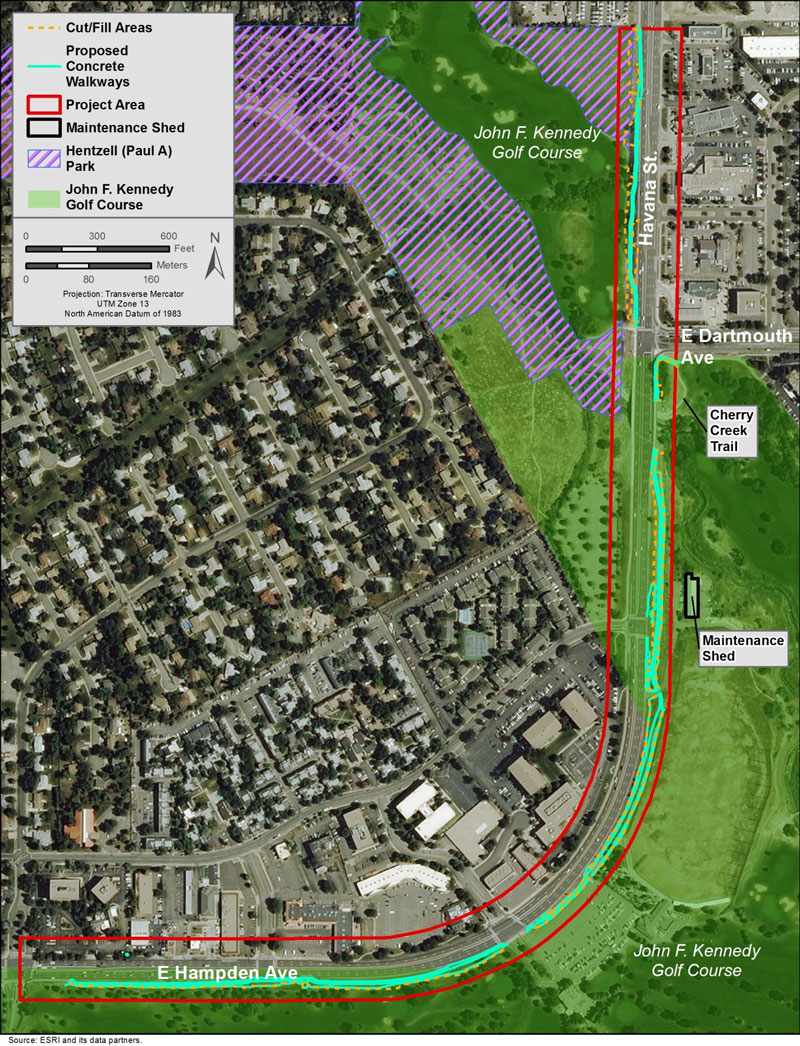 The Park Hill Storm Phase V project on Dahlia Street between 48th Avenue and up to Smith Road (before the railroad tracks) was under construction from October 2017 to the end of 2018. This project was a continuation of the Phase IV project completed in 2014, with the goal of reducing localized flooding problems and damage to roadways and private property..

The project addressed frequent flooding in the University Hills neighborhood in southeast Denver, at the geographic low point in S. Glencoe Street south of E. Yale Avenue. This location was identified as a Significant Flooding Location in the City’s Storm Drainage Master Plan. The project will improve the storm infrastructure to adequately drain the neighborhood’s low lying area. The additional outfall system will help contain flooding and improve public safety during major storms.

Construction was completed in 2018. Read more about the project at denvergov.org/eastyalestorm

A permanent flood protection stormwater detention facility for the Marston neighborhood in South Denver was completed in the city-owned natural area south of Garrison and Union Park. Denver Public Works and Denver Parks & Recreation coordinated park redesign and community review on this project that concluded in Summer 2018.

Read more about the work at the Glenbrook Stormwater Detention Basin

This neighborhood drainage project increased the capacity of the existing storm sewer system in the Virginia Village neighborhood of southeast Denver to reduce flooding and protect the area upstream of Potenza Park. Planning for this general storm project started in 2012, with design completed and approved in 2016. Construction concluded in 2018.