Improvements were identified through community input in the Far Northeast Area Plan, the Vision Zero Action Plan and Denver's Mobility Action Plan. The project will also coordinate with CDOT at the Peoria/I-70 interchange and with RTD to improve wayfinding north of Peoria Station. Peoria Street is one of the streets in the Vision Zero High Injury Network, and is adjacent to communities where the city is focusing on equity.

As part of the Central 70 project, CDOT is reconstructing the I-70 bridge over Peoria, which includes multimodal improvements on the east and west side of Peoria under I-70 and between the on and off ramps. These improvements are expected to be complete in late 2019 or early 2020.

The first phase of the Peoria Multimodal Improvements project will provide new sidewalk and a multi-use path where there are currently sidewalk gaps immediately north and south of the CDOT improvements. This will add pedestrian and bike infrastructure where most needed on the corridor, with design and construction following an accelerated process so work can be aligned with the CDOT construction schedule.

Phase 1 projects will include:

The paths and sidewalks will connect into existing sidewalks and planned CDOT improvements.

The intent of the meeting was to gather input on conceptual designs for the multi-use path, sidewalk improvements, and other multi-modal improvements along the corridor. These have been developed in cooperation with the project stakeholder work group and input from the community at the first public meeting. 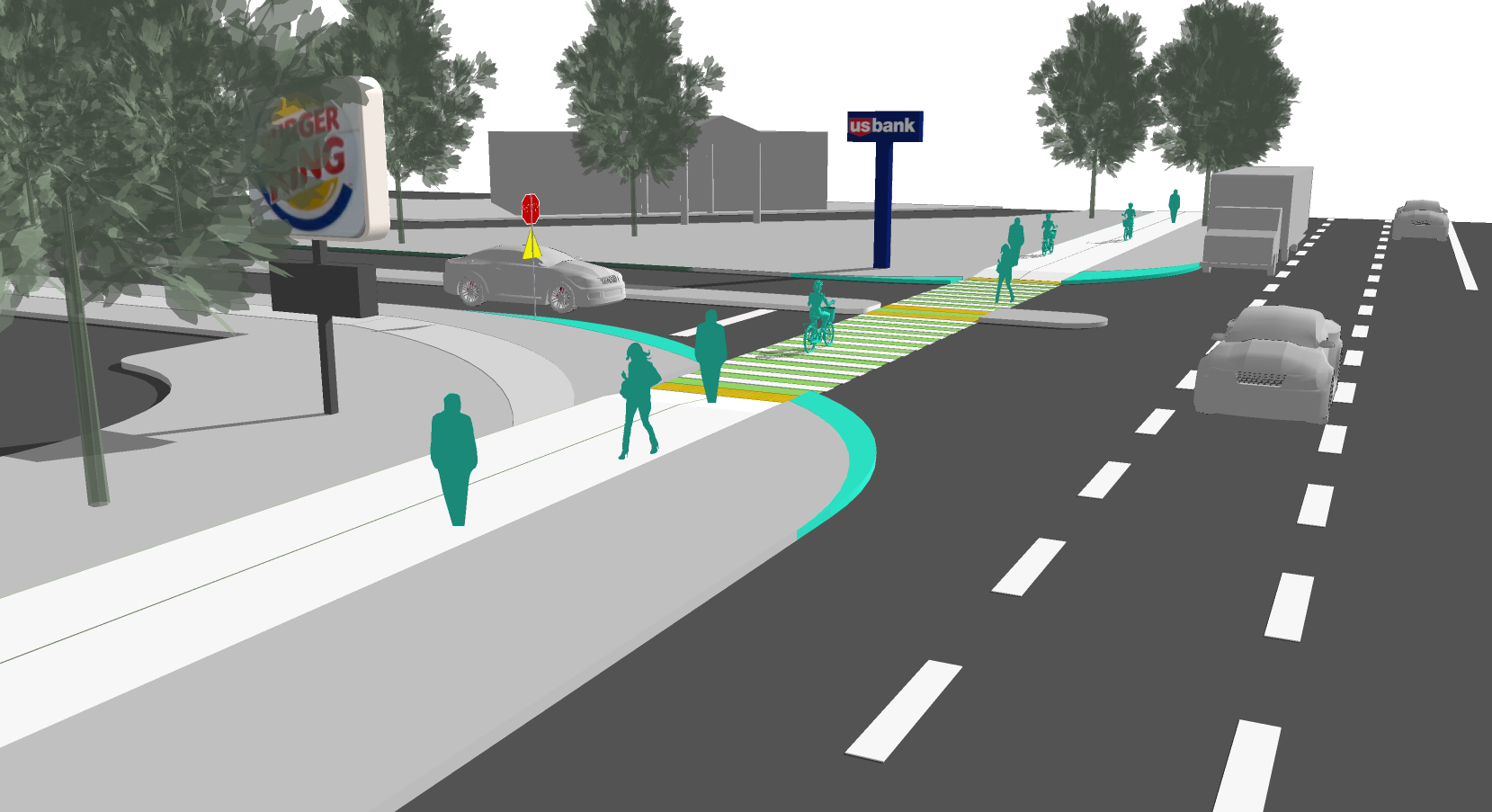 Preferred Alternative of Driveway between 46th Avenue and 47th Avenue 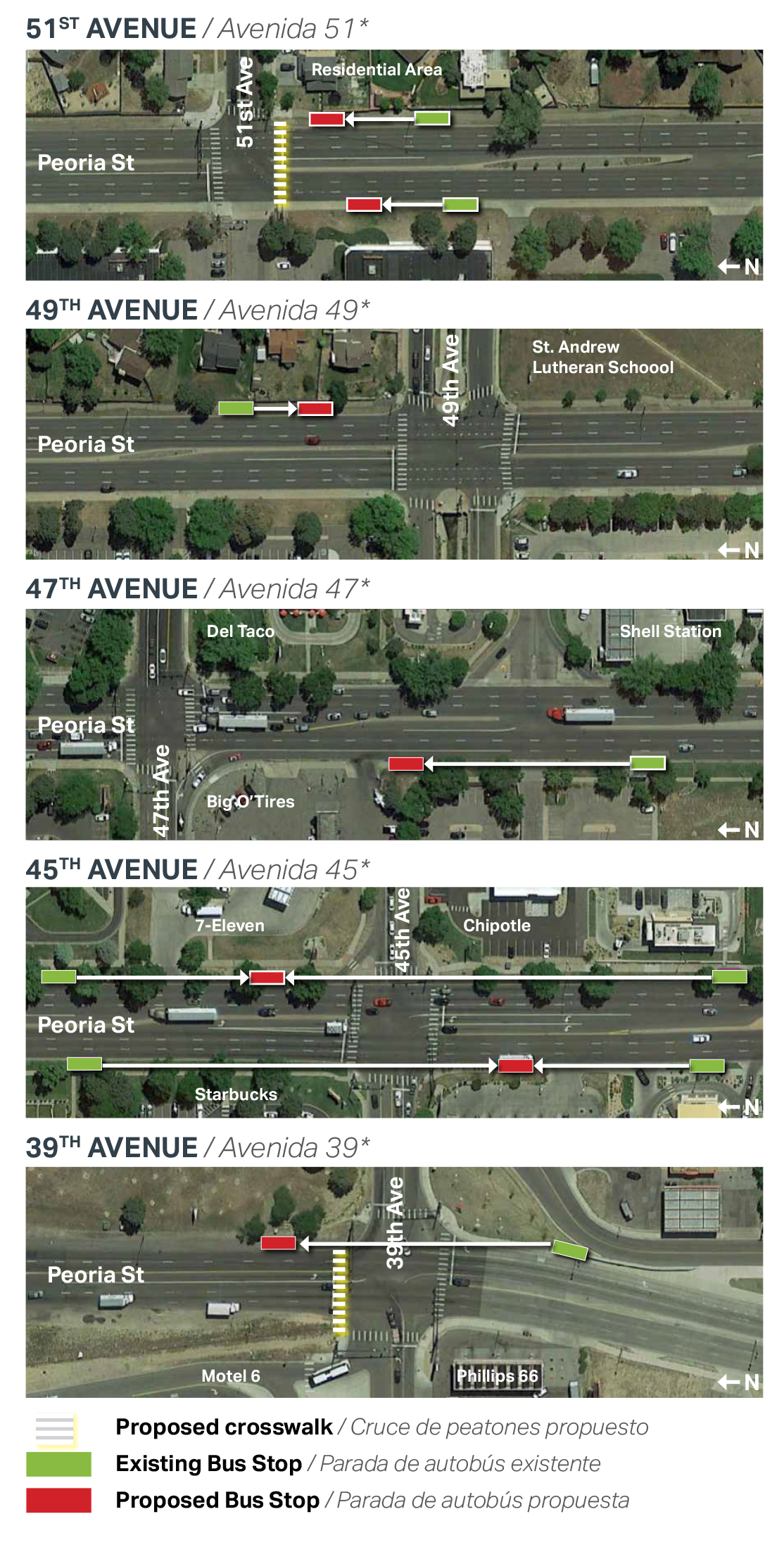 In the second phase of the project, the city will design a pedestrian and bike path on the east side of the roadway on Peoria, improved sidewalk on the west side of the roadway, and safer crossings at certain intersections to provide improved north-south multimodal connection for the Montbello neighborhood. Designs may also provide guidance for improved comfort near transit stops and clearer wayfinding signage on the corridor.

South of I-70, the multimodal path will connect to the existing path on the bridge over the railroad to provide a safe connection to the RTD Peoria Station. North of I-70, the path will continue to 56th Avenue to provide additional connectivity including access to recreation at the Rocky Mountain Arsenal National Wildlife Refuge.

The Situational Awareness Report provides background on the earlier planning and community input that led to the Peoria Multimodal Improvements Project, assessing how they can information the project design.

It also documents the existing conditions of the corridor within Denver city limits, including lane configurations, signal type and age, sidewalk presence and condition, bike and pedestrian involved crashes, and transit access. Finally, it includes a detailed profile of the roadway on every single block of the corridor and key priority takeaways for multi-modal improvements based on those conditions.

This report sets the stage for the next phase of concept planning and design by identifying current multimodal conditions, as well as the “Key Priorities” based on physical conditions in relation to the project goals. The community will have opportunities to review and supplement the identified priorities during the project.

Peoria Street is a car centric suburban style arterial with heavy traffic volumes and truck activity due to industrial land uses and proximity to I-70. The street is a major gateway to the Montbello neighborhood.

In general, Peoria Street has three southbound and three northbound lanes with a planted median that ranges in size from 4 feet to 14 feet. The median width decreases at left turn lane locations.

Sidewalk conditions on Peoria Street are not consistent and vary from recently constructed to missing on both the east and west sides of Peoria Street.

41% of sidewalks in the study area were ranked in poor condition with cracked pavement and unevenness. The sidewalk on the east side of Peoria Street north of 47th Avenue/Albrook Drive, which is classified as a shared use path, is in poor condition.

Peoria Street moves more than 50,000 vehicles a day and can be dangerous for bicyclists and pedestrians. Sidewalk conditions in some locations are poor with cracking and unevenness, and there no are bicycle lanes and limited multi-use paths.

In 2017, the City and County of Denver adopted the Denver Vision Zero Action Plan and Peoria Street was included in the roadways classified as the High Injury Network (HIN).

Peoria Street does not have any existing on street bicycle facilities. A shared use sidewalk has been designated on the east side of Peoria Street from 45th Avenue to 56th Avenue, but there is no infrastructure or signage along the route. The condition of the sidewalk on this route is poor with heavy cracking, deterioration, and unevenness and is in need of replacement. While bikes do utilize this shared path and other sidewalks on both sides of Peoria Street, the conditions are not suitable for regular bike travel.

Regional Transportation District (RTD) serves the Montbello neighborhood and Peoria Street with regional rail service at the Peoria Station and three local bus routes that travel on Peoria Street as of summer 2019. These include:

Peoria Station on the southern edge of Peoria Street is served by RTD’s University of Colorado A Line and R Line. These regional rail lines serve downtown Denver, Denver International Airport, and Aurora.