Major paving operations for 2019 have concluded.

ADA ramp, curb, gutter and other concrete construction, asphalt and landscape work for the week of February 18, 2020:

HAMPDEN SOUTH: From Quincy to Union Avenues, between Quebec and Yosemite Streets

Road closures may be required for construction, street maintenance, or special events. All closures to the public right of way require a permit from the City and County of Denver. The permit requires construction companies to resolve all local access issues during a closure.

Potholes and sinkholes may have similar appearances but their causes are different. Both are deformations in the pavement that collect water, can be jarring to hit, and in extreme cases, cause damage to our cars.\

Get help reporting a pothole

Water, freezing temperatures and vehicle loads can combine to break apart the surface of a pavement. These can rapidly develop into potholes that range in severity from a nuisance to a significant safety problem. Street maintenance has crews that are out daily as weather allows looking for and patching potholes. In warm weather most potholes are patched with hot asphalt, but in winter months the potholes are patched with temporary cold asphalt to make the street safe until warm weather allows for a more permanent repair.

Occasionally a problem will occur beneath a street where soil washes away. This usually occurs when a break occurs to an underground pipe. The pavement will settle into the void, creating a sinkhole. The initial appearance of a sinkhole is similar to a pothole. Street Maintenance and other agencies will investigate all suspected sinkholes for underlying problems and then perform a permanent repair to utilities if warranted and then the pavement.

Starting in 2015, Denver greatly expanded pedestrian ramp construction to comply with the Americans with Disabilities Act of 1992 (ADA).

According to ADA standards, newly constructed or altered streets must contain curb ramps. As a result, Street Maintenance’s Annual Concrete Program will prioritize the installation of ADA pedestrian ramps in all locations where the Street Maintenance Division is planning to do street work and a ramp may need to be replaced. Performing ramp improvements before the street work is done saves money, preventing new street work from being damaged by ramp construction. ADA acessibility is mandated at all intersections.

Similarly, reported curb and gutter damage will be inspected and any necessary repairs will be prioritized accordingly. The City’s goal is to perform repairs prior to, or in conjunction with, the annual paving program and address spot repairs based upon severity and coordination with other requests to allow the work to be performed in an efficient manner.

City ordinances establish that abutting property owners are responsible for installation, repair, and maintenance of all sidewalks within the public right-of-way in the City of Denver. If requested, the City will inspect sidewalks, and if they are found to be in need of maintenance, notify property owners of their responsibility to arrange for repairs. Denver Public Works may assist with maintenance of sidewalks near some public facilities and in certain areas of the public right-of-way.

Damaged sidewalk complaints must be submitted with a verifiable requestor name, address and phone number. If you wish to remain anonymous, contact your City Council representative to report the issue on your behalf.

The City of Denver is responsible for the maintenance of curbs and gutters along public streets in the City. In those areas where no curbs exist, the City will require developers to install curbs if property development/redevelopment is occurring, or in select cases, the City may install curb lines as part of other capital maintenance activities. In instances where sidewalks and curbs have been constructed as one unit, the City will make an assessment if any needed repairs are the responsibility of the City or the abutting property owner.

The majority of curb repairs made by the City are in conjunction with other projects such as paving operations or utility work. This helps to provide a higher quality project and fewer construction disruptions to any specific street. A citizen may request an inspection and ‘spot’ repair, but these will be made only if a public safety issue is discovered. Repairs to normal aging will be deferred until that entire neighborhood is scheduled for pavement rehabilitation.

Because of ecological impact of unpaved alleys and the economic drain of maintaining them, in 2005 Mayor Hickenlooper created a program to pave with asphalt the more than 1000 unimproved public alleys in the City. The program took approximately 6 years to complete with 100 to 200 alleys being paved each year.

There are four kinds of alleys in Denver, and each is maintained differently.

Street Lights or Street Lamps come in a variety of shapes, styles and sizes, but in general, the term refers to the lights that are on the sidewalks or the sides of streets and shed light on the right-of-way.

Street lights in the City of Denver are maintained by Xcel Energy. Any street light problems should be reported to them using their Outdoor Lighting Outage form.

Traffic lights and signals (sometimes referred to as a "Traffic Light" or "Stop Light,") are the red, yellow and green lights that direct traffic at intersections. The correct term for this type of light is "Traffic Signal" or "Illuminated Traffic Signal."

Call 311 or use Pocketgov to report problems with signal lights.

These maps include paving work that was scheduled in Denver for 2018. 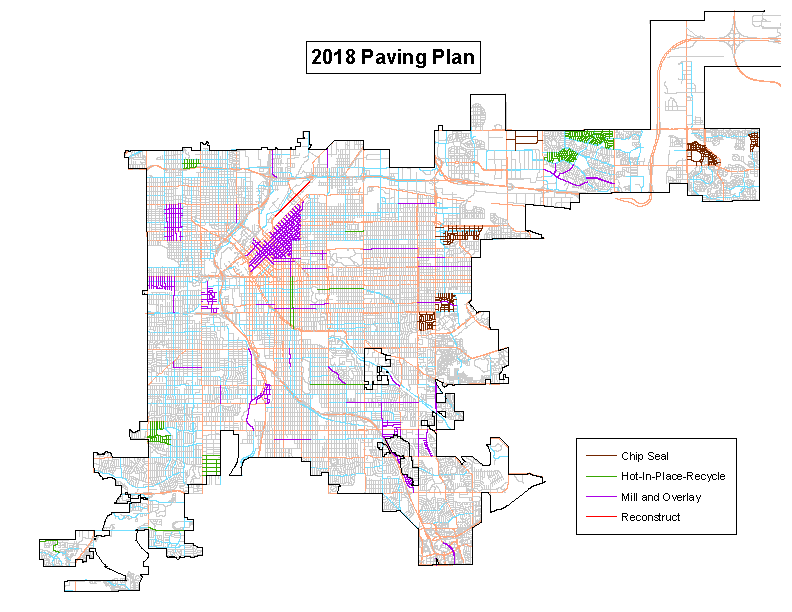 Every year, Denver Public Works engineers prioritize the City's paving needs and create a paving plan for work to be completed.

Request a repair or report a problem